At first glance, portable power stations and traditional generators appear quite similar. After all, both are used to power a range of devices during blackouts and off-grid trips.

Read on to learn more about portable power stations vs. generators. We’ll cover their characteristics, functionalities, limitations, and what they’re used for. By the end of this guide, you’ll know which is better for you.

How Does a Portable Power Station Differ From a Traditional Generator?

Generators vs. portable power stations have many differences, including:

Portable power stations have lower power consumption than traditional generators do. Most models have battery capacities of around 1,000 to 3,000 watt-hours, which means they can provide their maximum output for one to three hours.

Because they consume so much fuel, traditional generators can power a range of devices, homes, and offices for eight to ten hours. Some high-end models can even power homes for 15 hours.

However, there are exceptions. For instance, the EcoFlow DELTA Pro 3600W Portable Power Station has a power rating of 3,600 watts and an impressive 3.6-kilowatt battery capacity that can be expanded to 25 kilowatts. That’s enough power to charge your phone over 300 times and run lights for four days.

While traditional generators run on gasoline, propane, or natural gas, portable power stations run on electricity. As a result, you can charge portable power stations in three different ways: through alternating current (AC) outlets, car ports, or solar panels. Solar generators are particularly great for travelers and other high-mobile individuals.

Traditional generators can only be used outside because they produce carbon monoxide (CO). If you use a traditional generator indoors, the CO will kill you in a few minutes. On the flip side, power stations don’t produce CO, so you can use them wherever you like.

Power stations are usually for powering single devices or multiple low-energy devices, such as:

In comparison, traditional generators can charge large appliances simultaneously, including:

Traditional generators are generally very loud. This is because they are actively burning fuel to produce power. On the other hand, portable hand stations are quiet because they don’t burn any fuel. They also don’t have engines or other “moving parts” that create a lot of noise.

Portable power stations usually hum no louder than mini-fridges, while most generators are as noisy as a truck, hairdryer, or busy street corner. However, some traditional generators are quieter. Case in point: Honda has produced a series of super quiet generators that are quieter than a normal conversation.

Last but not least, traditional generators are much heavier than portable power stations.

Thanks to their large fuel tanks and engines, traditional generators often weigh over 100 pounds, with first-rate models often weighing over 200 pounds.

In contrast, portable power stations usually range from four to 22 pounds. As such, they’re much more portable than their traditional cousins are. Their lightweight and compact design make them an excellent fit for travelers, campers, hikers, tailgaters, and other highly-mobile people.

When Should You Use Gas-Powered Generators?

Traditional or gas-powered generators are best used for certain situations, including:

A gas-powered portable generator can help you run appliances, homes, and offices during severe power outages. They can be a lifesaver for homeowners in areas prone to severe thunderstorms, heavy blizzards, and other dangerous weather events.

Brands like Westinghouse, DeWalt, and other big names are known for producing reliable gas-powered generators for emergency power. These models can run for over 10 hours and have enough power to run multiple appliances simultaneously.

Let’s take a look at the best portable generator for emergency power. 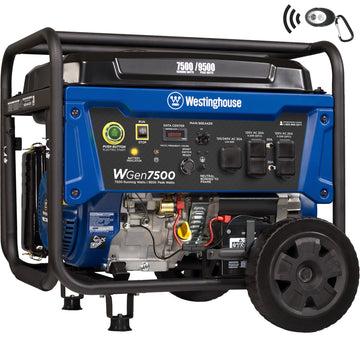 Other standout features include:

If you need to use power tools while living or working off-grid, get a gas-powered generator. These beasts can reliably power all of your hand tools, even if you’re living in the middle of the forest and have no access to grid power.

Some gas-powered generators are better for working off-grid than others. A great example is the Honda EU3000is 3000W Inverter Generator. 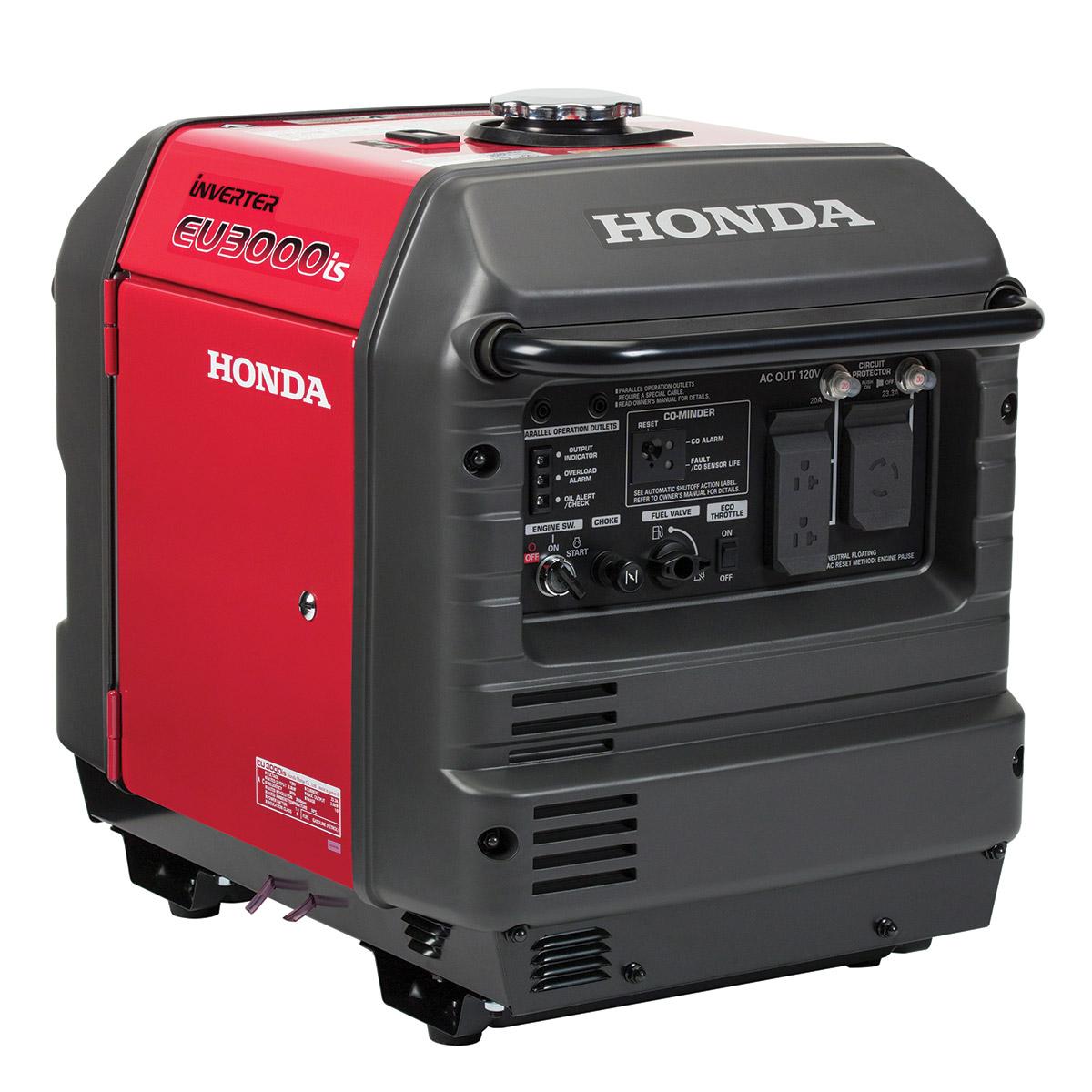 Fuel-efficient and super quiet, the Honda EU3000is 3000W Inverter Generator can power a wide range of tools and appliances, including hand tools, fridges, furnaces, and more.

Unlike most models of this caliber, it’s incredibly quiet. It only operates at 50 to 57 decibels, which is quieter than a normal conversation. As such, this baby is ideal for working in an area with sound ordinances.

Thanks to Honda’s exclusive Eco Throttle System, the Honda EU3000is 3000W Inverter Generator is also extremely fuel efficient. Depending on the load, it runs from 6.9 to 19.6 hours on a single tank.

If you need more power to run your tools, you can add a second Honda EU3000is 3000W Inverter Generator for additional power. Use an optional cable to hook the two models together.

The best gas-powered generators for running larger appliances have big tanks, powerful engines, and other unique features. This includes: 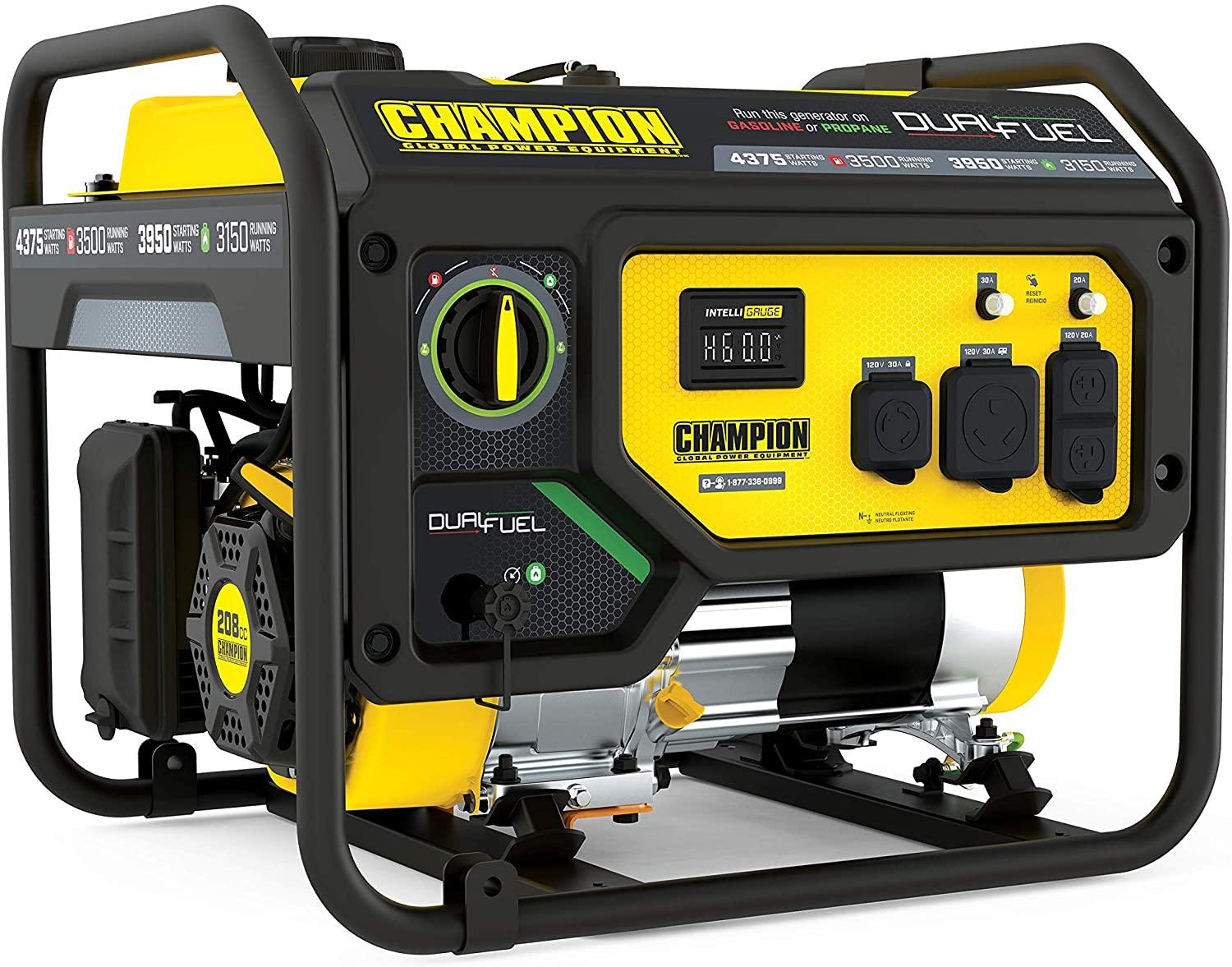 Convenient and versatile, the Champion 200965 3500W Dual Fuel Portable Generator is ideal for running fridges, ovens, and other large appliances. It has a wattage of 3,500 and a 208cc engine that can run on either propane or gasoline. It can provide up to 10.5 and 14 hours of runtime on propane and gasoline, respectively.

Many users were impressed by the wide range of appliances this baby can run. Besides fridges, freezers, and air conditioners, it’s great at running RVs and outdoor cooking equipment.

Every purchase of this generator comes with:

When Should You Use Portable Power Stations?

Although gas-powered conventional generators have higher power output, they’re not ideal for many situations. Here’s when you should use a portable power station:

When You’re In Need of a Backup Power Source

Some brands and models are better at providing backup power than others are. Here are our best picks: 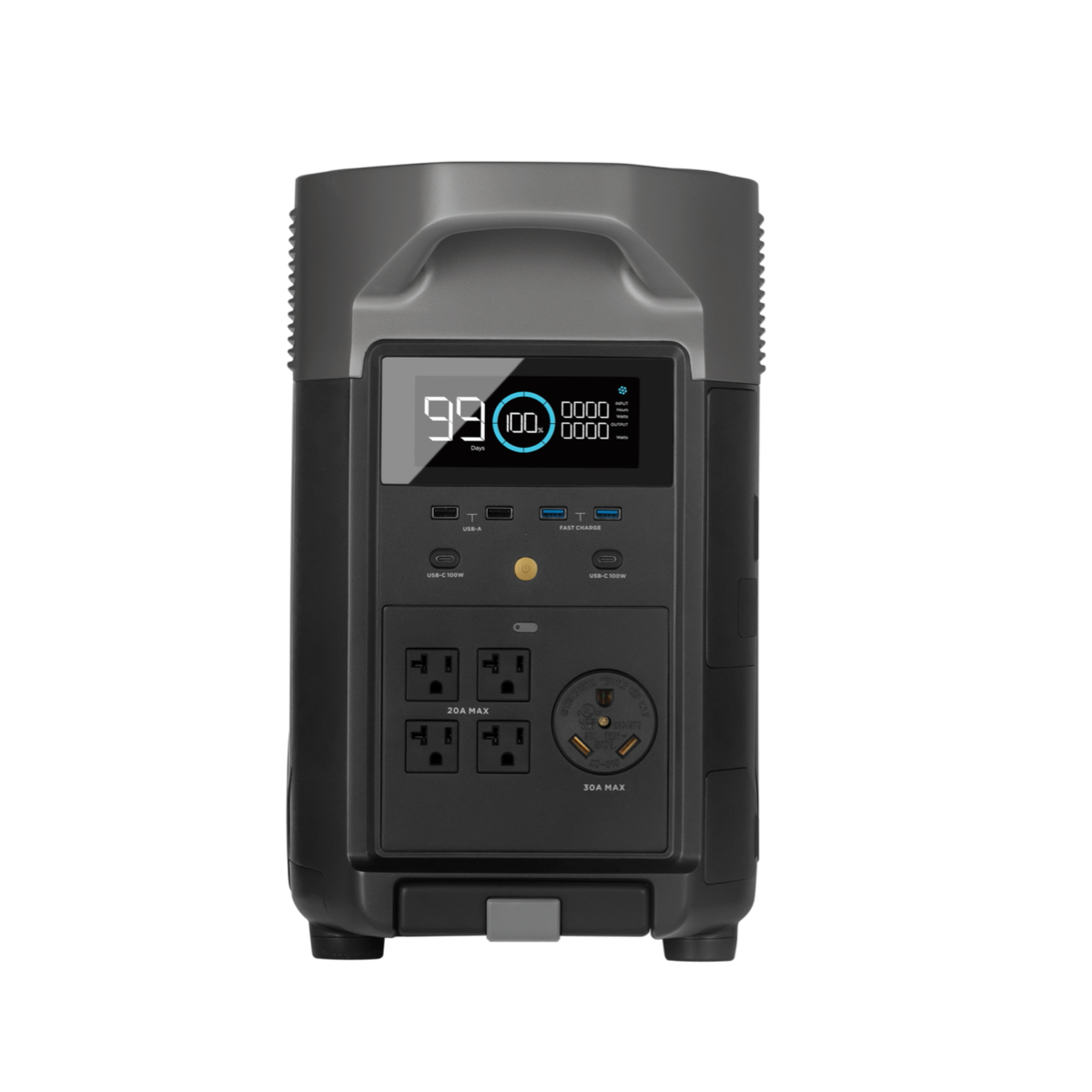 The EcoFlow DELTA Pro 3600W Portable Power Station is EcoFlow’s premier home battery. With a capacity of 3,600 kilowatt-hours that can be expanded to 25,000 kilowatt-hours, this portable power station can be directly integrated with your home circuits through the Smart Home Panel.

This beast is also great for powering devices on the go. It features a suitcase-like extendable handle and wheels that make transportation easy. It has a dedicated AC outlet and Anderson port for outdoor adventures and road trips.

Every purchase of the EcoFlow DELTA Pro 3600W Portable Power Station comes with: 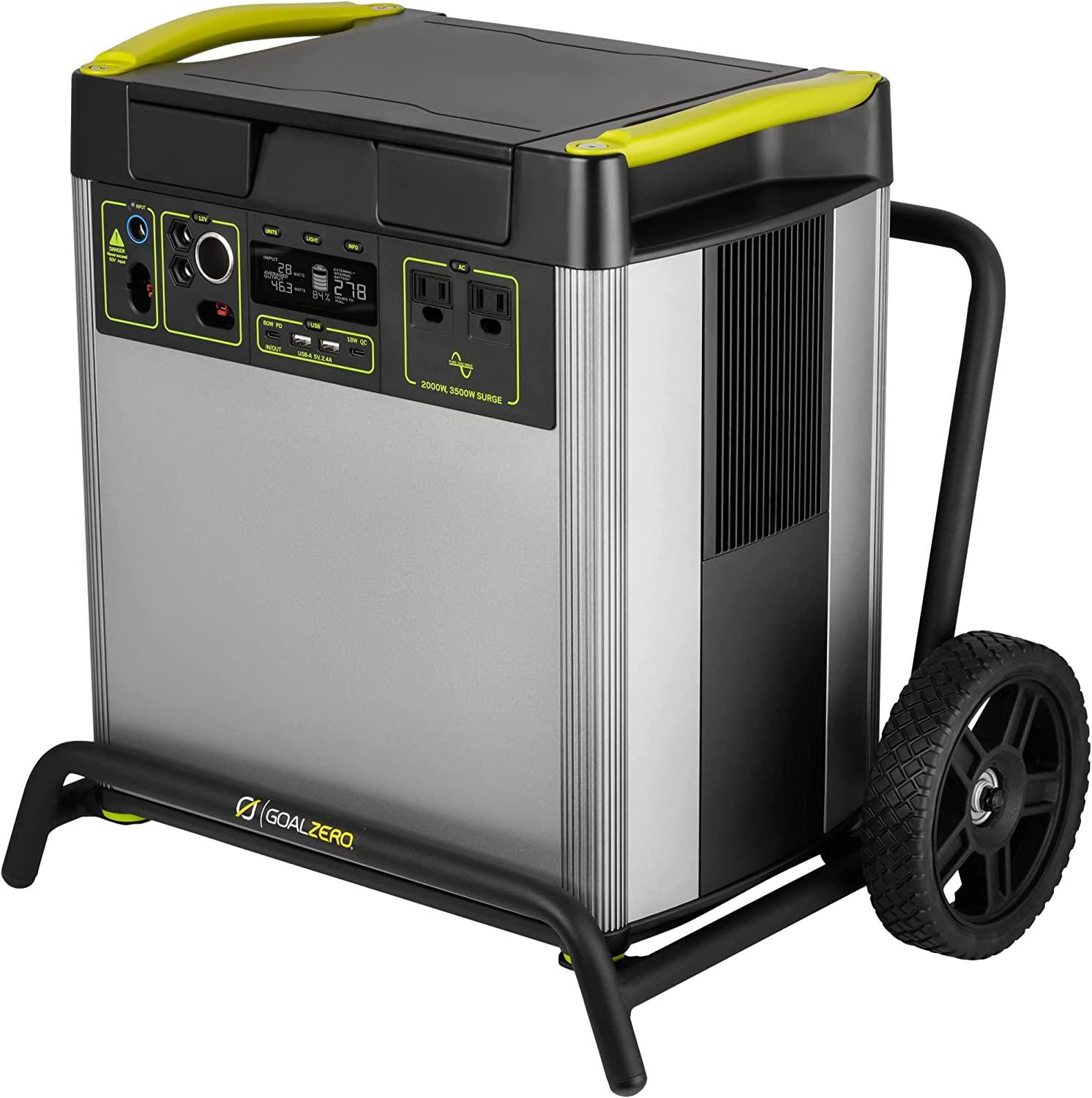 The Goal Zero Yeti 6000X 2000W Portable Power Station is an industry-leading inverter power bank that lets you run a range of appliances. It provides enough power to charge:

This baby has seven different output ports, including:

All portable power stations invert their battery’s direct current (DC) into an AC, which means they can safely power sensitive electronics.

In contrast, gas-powered stations usually have a Total Harmonic Distortion (THD) that is unsuitable for powering sensitive products. The only exceptions are gas-powered inverter generators.

Let’s take a look at some of the best power stations for powering sensitive electronics.

Compact and lightweight, the BLUETTI EB55 700W Portable Power Station is one of the best picks for powering sensitive electronics. Thanks to its built-in 700-watt inverter, it can safely run mobile phones, projects, laptops, and more. You can use this beast to run 13 devices simultaneously.

This power station has the following ports:

You can recharge this baby in four ways: through a wall outlet, generator, solar panels, and your car outlet. 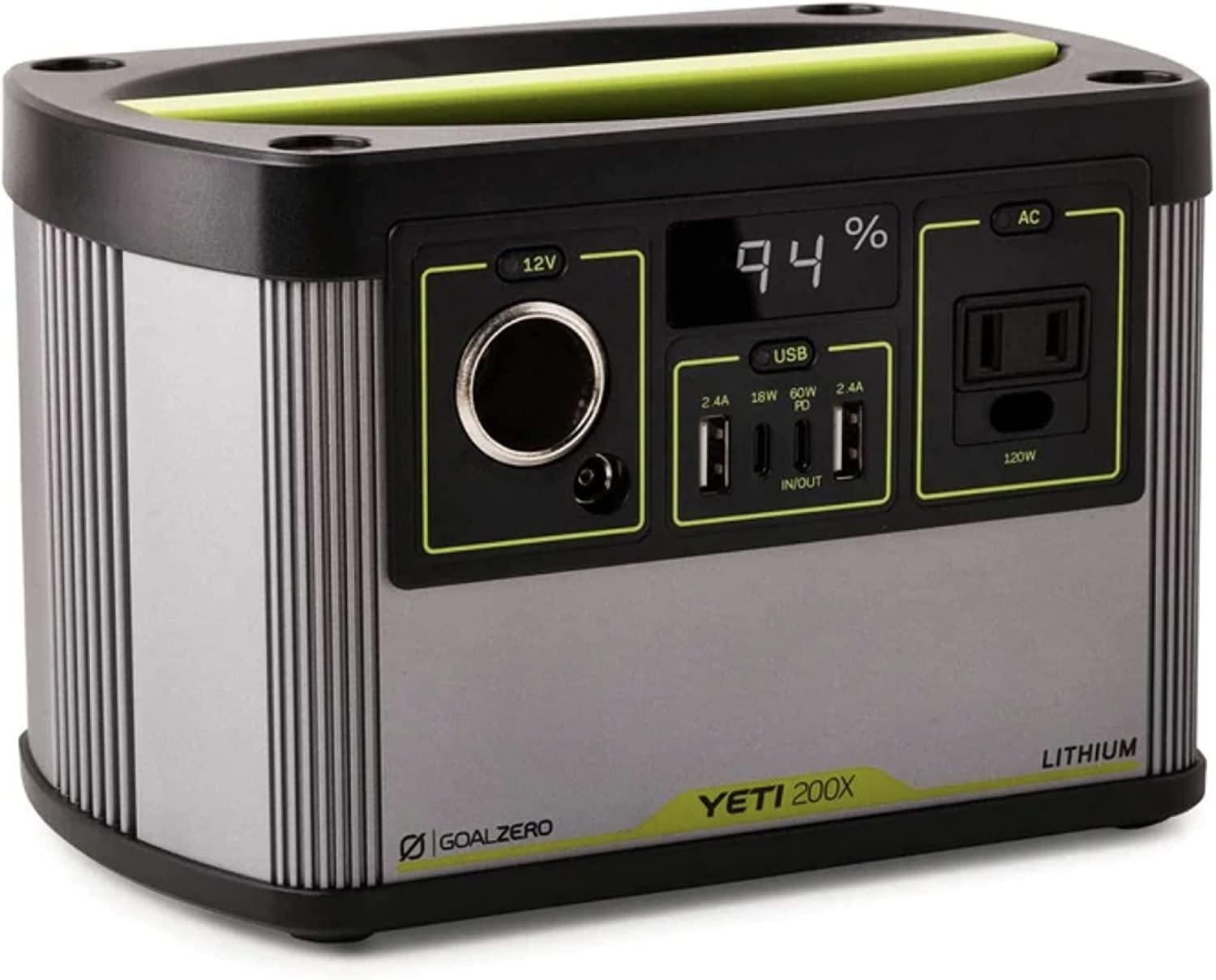 You can recharge this portable battery with a Goal Zero solar panel, 12V car port, or a wall outlet. 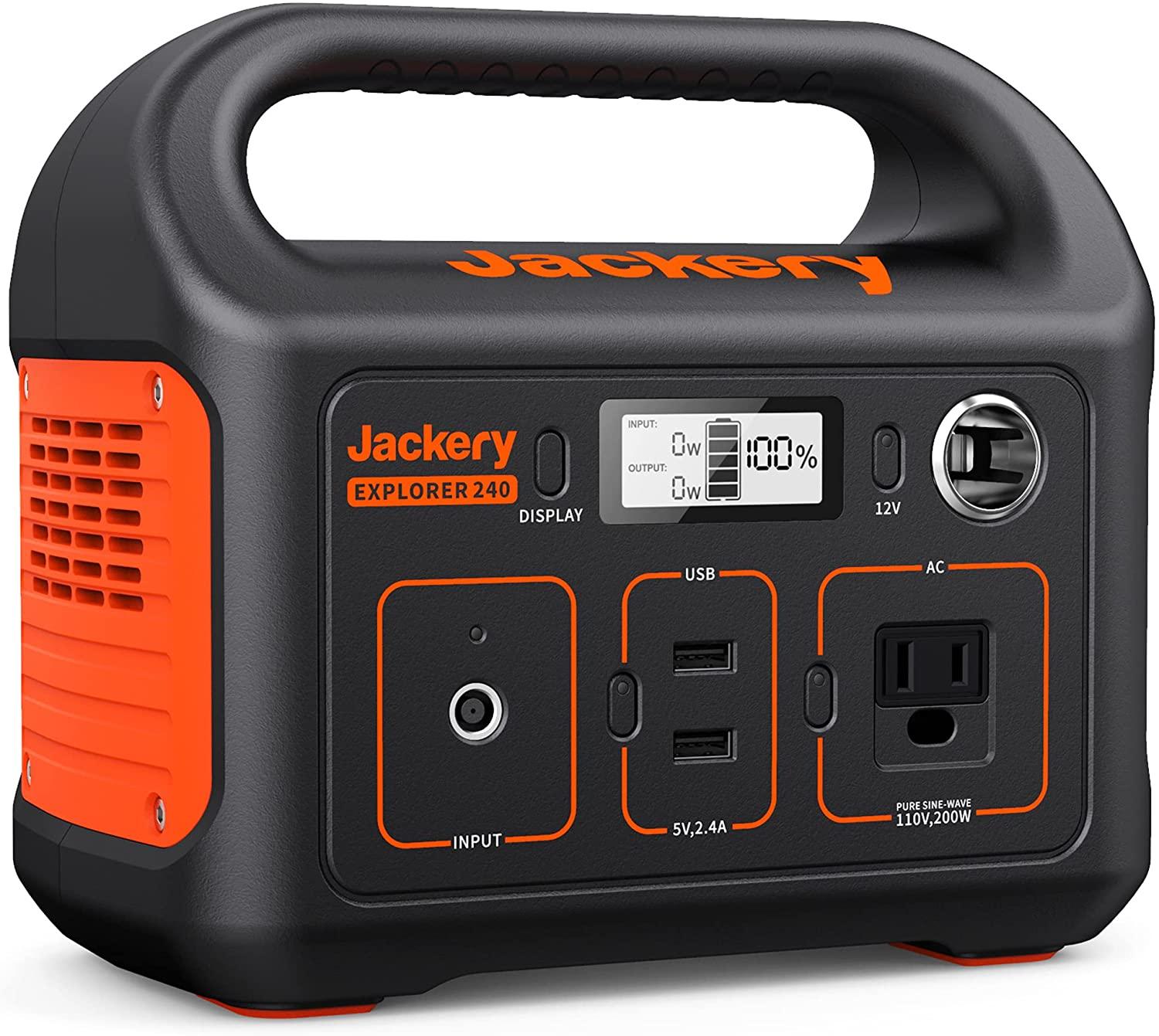 Included in the “Best Portable Power Station for Use in the Outdoors” by Digital Trends, the Jackery Explorer 240 200W Portable Power Station is a natural choice for running medical devices. Its pure sine wave inverter can power medical devices without minimizing their life span or causing other problems. It’s also extremely lightweight — at only 6.6 pounds, you can easily take it with you on hiking and camping trips.

Besides medical devices, you can use the Jackery Explorer 240 200W Portable Power Station to power a broad range of devices, including mini coolers, laptops, lights, fans, and phones.

Other cutting-edge features include:

Every purchase of the Jackery Explorer 240 200W Portable Power Station comes with: 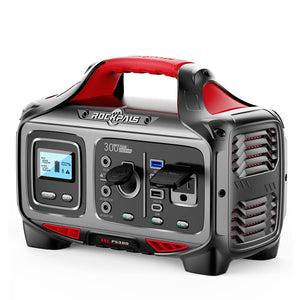 Another great choice for running medical devices is the Rockpals 300W Portable Power Station. Equipped with a 288 watt-hour rechargeable lithium battery, this beast’s design gives you enough power to run small as well as heavy-duty devices. Besides insulin pumps, CPAP machines, and other medical machines, this portable battery can run LCD televisions, laptops, mini-fridges, and other appliances.

It has eight ports for maximum connectivity:

This portable battery can be recharged by:

Which Is Better: Portable Gasoline Generators or Portable Power Stations?

Are portable gasoline generators or portable power stations better? There’s no one-size-fits-all answer to this question. The answer varies depending on your specific needs and preferences.

In general, you should get a portable gasoline generator if you want to:

However, you should get a portable power generator if you want:

What Are Paxcess Portable Power Stations? Are They Any Good? 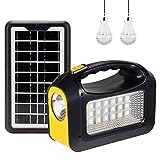 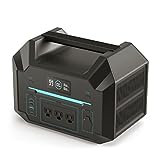 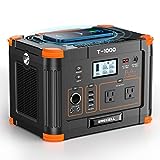 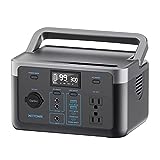 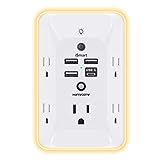